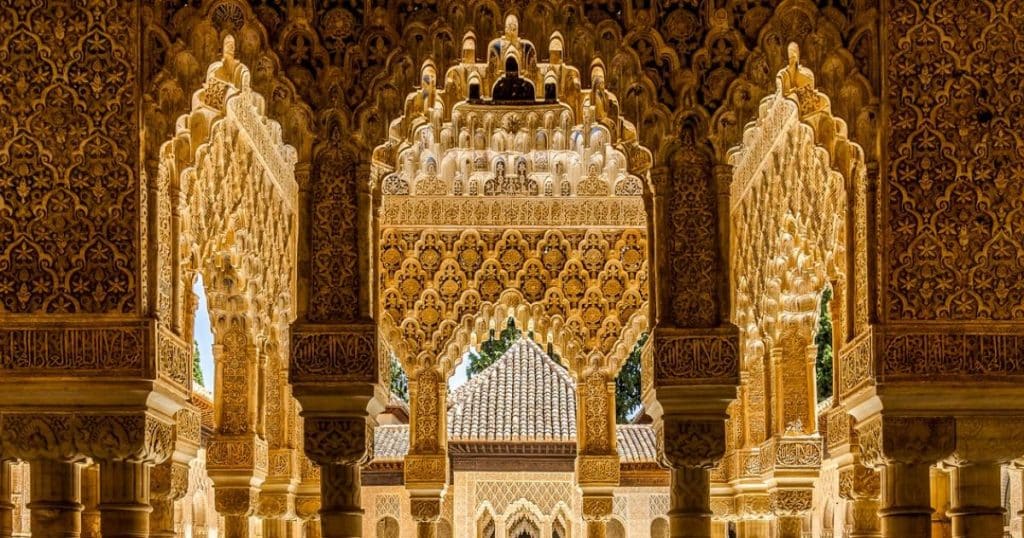 From its vantage point over the city of Granada, the Alhambra is a magnificent example of our country’s Muslim cultural heritage. Inside, the Nasrid palaces impress with their richly detailed architecture. But the gold of the muqarnas (architectural ornaments reminiscent of stalactites) of the Palace of the Lions, about five hundred years old, have deteriorated and show corroded areas with surprising purple reflections. Carolina Cardell and Isabel Guerra, from the University of Granada, have discovered the origin of these peculiar tones and convincingly explain the corrosion mechanisms of gilding in an article published in Science Advances. Purple gold does not exist in jewelry, since it is not the result of an alloy (as is the case with rose gold, an alloy of gold, copper and silver), but of a very particular configuration of the material. Using various spectroscopic methods, the researchers identified 70-nanometer gold particles. How do these nanospheres influence the color? When light falls on a set of them, an electronic resonance effect favors the absorption of wavelengths located in the green region of the visible spectrum. Reflected light is made up of a mixture of blue and red, the proportions of which vary depending on the size and shape of the particles. In the case of the golds of the Alhambra, the size causes a preponderance of blue in the reflected light, and hence the violet hue. The fact that golds have been able to degrade may be surprising, since gold is known to be one of the most stable metals. In fact, part of the fascination it arouses is due to the fact that it is resistant to corrosion, that is, to the reaction with an oxidizing agent, such as atmospheric oxygen. However, under certain conditions, gold can become degraded. For example, since at least the 17th century, it has been dissolved in aqua regia (a mixture of hydrochloric acid and nitric acid) to make Cassius purple, a reddish pigment used to color glass. But in the Alhambra the aqua regia has not intervened, but rather a succession of electrochemical phenomena. The weak point of the Alhambra ornaments lies in the chosen gilding technique. The artisans used a tin substrate to increase the thickness of the sheet and make it easier to handle. When the coating was applied to the muqarnas plaster, the very thin layer of gold was imperceptibly damaged in places. And those microdefects represent contact surfaces between the tin layer and the humid and salt-laden air of Granada. The researchers postulate that the contact of both metals with water rich in chloride ions caused the tin to degrade by corrosion (as in a galvanic battery) and the Sn2+ ions to deposit on the gold foil. This ended up partially covered by such deposits, so the gold was unevenly exposed to atmospheric oxygen. And then, the gold from the less exposed areas (and, therefore, with a lower oxygen concentration) dissolved through a phenomenon known as “differential aeration corrosion” and precipitated in the form of spheres of about 70 nanometers in diameter. . Some experts have reservations about this hypothesis, especially in the absence of experimental evidence to confirm the proposed corrosion mechanism. And other mechanisms are also conceivable, such as a possible process of photoreduction. In any case, the researchers hope that their study will allow a better understanding of the deterioration of the gilts, as well as finding methods to conserve and restore them.
Pierre Giraudeau
Reference: “Natural corrosion-induced gold nanoparticles yield purple color of Alhambra palaces decoration». Carolina Cardell and Isabel Guerra in Science Advances, vol. 8, art. eabn2541, September 9, 2022.

Share. Facebook Twitter Pinterest LinkedIn WhatsApp Reddit Email
Previous ArticleMarried at First Sight Star Taylor Swift’s Relationship With a Man Ended in a Traumatic Way
Next Article The director of God of War Ragnarok wants to make a Castlevania: “I just got into trouble”