Nobel Prize in Chemistry 2022 for the promoters of “click chemistry” 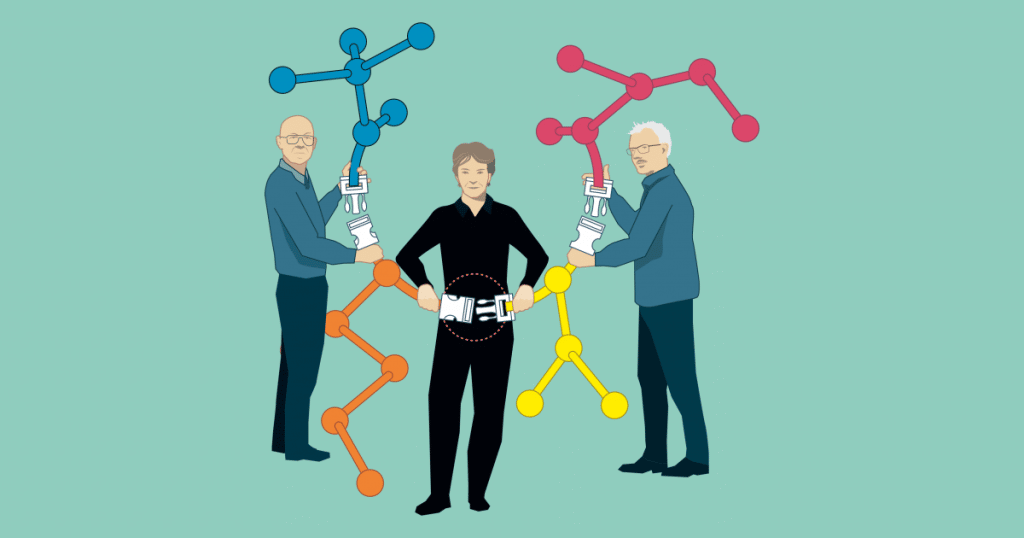 Chemists have always been driven by the desire to build ever more complex molecules. In pharmaceutical research, this has often led to the re-creation of natural molecules with medicinal properties, a process that has given rise to many admirable constructs, but is often time-consuming and expensive. This year’s Nobel Prize in Chemistry, awarded to Carolyn R. Bertozzi of Stanford University, Barry Sharpless of the Scripps Research Institute, and Morten Meldal of the University of Copenhagen, recognizes the creation and development of a methodology that simplifies the construction of molecules from more basic components. The first step was taken by Sharpless, who had already received the Nobel Prize in Chemistry in 2001 for the development of certain types of asymmetric catalysts (which drive the formation of certain molecules but not their mirror image). Around the year 2000, Sharpless coined the term “click chemistry” to refer to a simple and reliable form of chemistry where reactions occur very quickly and unwanted by-products are avoided. Shortly thereafter, Meldal and Sharpless independently presented a reaction that has become the crown jewel of click chemistry: the copper-catalyzed azide-alkyne cycloaddition. It is a very elegant and efficient chemical reaction that is used today, among many other uses, in the development of pharmaceutical products, in DNA mapping and in the synthesis of materials that are more suitable for a given purpose. For her part, Bertozzi took click chemistry to a new level by developing bioorthogonal reactions, which occur inside living organisms. These reactions make it possible to map polysaccharides (important but elusive biomolecules) on the surface of cells without altering their chemical characteristics. Bioorthogonal reactions are now used throughout the world to explore cells and track biological processes. Thanks to them, it has been possible to develop more selective antineoplastic drugs, which are currently being tested in clinical trials. We do not yet know if these new treatments will work, but what has become clear is the enormous potential of click chemistry and bioorthogonal reactions, which have opened a new era that is simpler, more elegant, more efficient and more useful in the construction of complex molecules.
Nobel Foundation
More information on the website of the Nobel Foundation
On the “Nobel Prize Winners in Research and Science” page you will find a selection of I&C articles written by some of this year’s Nobel Prize laureates, as well as other content related to their scientific contributions.