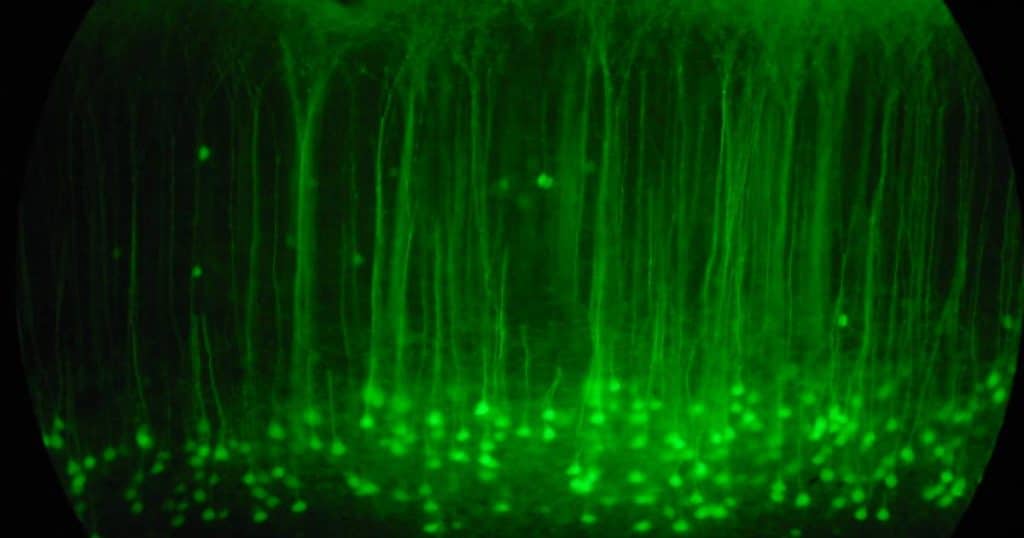 The holy grail of neuroscience is the complete mapping of the human brain: the faithful representation of the undergrowth of nerve cells with the arborescent branches of dendrites sprouting from them and the much longer axons that often serve to transmit signals from a sensory organ or a muscle fiber. The general image includes the small nodules of the dendrites; that’s where the synapses are. These are points of contact and switching, living connections with other neurons. Sifting this thickness down to the level of individual cells and representing it spatially is a gigantic task that until recently must have seemed utopian. Recently, the young research field of “connectomics” has gained a better understanding of the interaction of neurons. This is possible with the use of three-dimensional electron microscopy. From thin-section images of brain tissue samples, plastic images of entire cell groups can be assembled. Since fresh human brain tissue is not readily available – usually only after surgery in epilepsy patients – the mouse is used as a model organism. The evolutionary relationship between humans and rodents makes the choice plausible. In recent years, the team led by Moritz Helmstaedter at the Max Planck Institute (MPI) for Brain Research in Frankfurt has developed its expertise in connectomic analysis. But is our head nothing more than an inflated mouse brain with a thousand times more neurons? Or is human nerve tissue different after all? To answer this question, the MPI group undertook a detailed comparison of mice, macaques, and humans. This time, the human tissue did not come from epileptics, but from two patients operated on for brain tumors. The researchers wanted to prevent antiepileptic drug treatment, which often lasts for years, from clouding the picture of synaptic connections. They compared the samples with those from a macaque monkey and those from five mice.

Monkey brains are more ‘concerned’ with themselves

For one thing, aside from obvious quantitative differences such as brain size and number of neurons, the results were fairly similar, justifying the use of animal models. But at one point, the MPI team experienced a real surprise. Some nerve cells, called interneurons, are characterized by interacting exclusively with other nerve cells. These ‘intermediate neurons’, with mostly short axons, are not primarily responsible for processing external stimuli or triggering physical reactions, but merely amplify or attenuate internal signals. This type of neuron is not only more than twice as common in macaques and humans as it is in mice, but it is also especially interconnected. Most interneurons couple almost exclusively to their own species. As a result, its connectome weight is comparatively ten times stronger. Presumably, this self-absorbed signal processing is the precondition for increased brain performance. To hazard a comparison with relatively primitive technology: in artificial neural networks—algorithms modeled after interconnected nerve cells—all it takes is one or two so-called hidden layers of self-referential switch points between input and output levels to produce the amazing successes of artificial intelligence.
Michael Springer