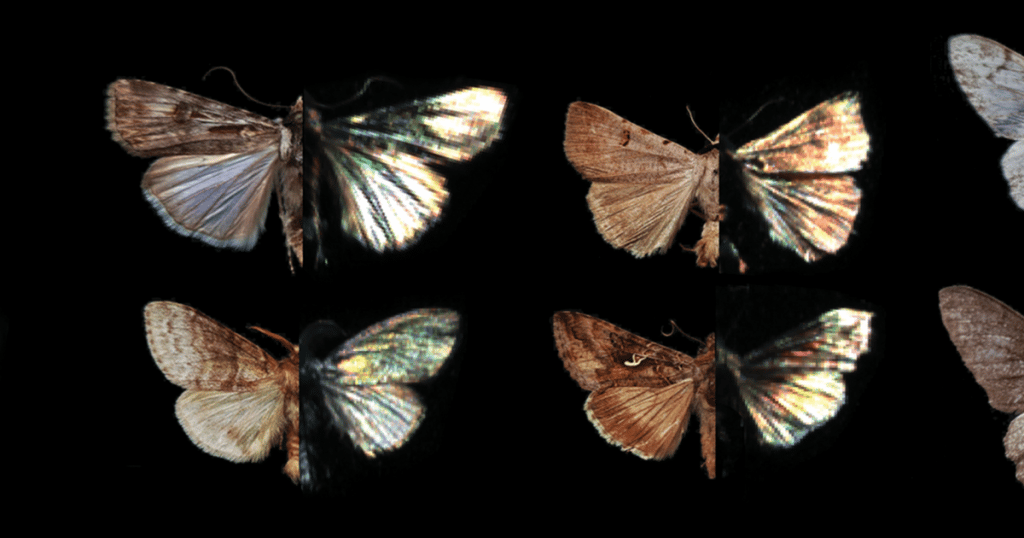 The moths’ brown and gray colors don’t capture our imaginations the way the lively livery of nearby butterflies does, but according to a recent study, that’s more about the visual ability of the human eye than the moths themselves. By photographing the wing scales of 82 moths belonging to 26 species with a camera that captures an additional segment of the light spectrum, the infrared, the researchers viewed these Lepidoptera with a new prism. The human eye misses infrared light because its wavelength is too long, but in that part of the spectrum the brownish hues we’re used to seeing when moths flap their wings turn into vibrant iridescent colors, they describe in the Journal of the Royal Society. Interface. Aside from exposing that beauty, the new data also revealed species-specific structural differences in the way wings reflect and scatter infrared light. The diversity of these light signals, which have their origin in the microscopic scales that cover the wings, could help to recognize each species with the lidar (English acronym for light detection and telemetry), an instrument that emits and captures infrared light. Acoustic radar is already used to census moths in open fields. But those traits specific to each type of moth might make it easier to track their variable nocturnal migrations, when they serve as an important food source for birds and other animals. Entomologist and radar remote sensing specialist Alistair Drake of the University of New Wales in Australia highlights the potential limitations of lidar in tracking moths. “The drawback of lidar is the narrowness of the beam,” he explains as an outside observer. The radar beams used to detect insects in flight are between 18 and 30 meters wide, enough to capture the passage of many individuals; in contrast, the lidar beam barely reaches a few centimeters, something like the wingspan of a single sphinx. “So we don’t know if we’ll be able to aim the vertical beam accurately enough to detect enough moths in flight.” In order to test the proposed detection method, study lead author Meng Li, an optical entomological remote sensing instrument specialist at Lund University, and her team are evaluating the ability of lidar to detect moth species. who frequent the place of study. “Since April, we’ve been tracking with radar, lidar and a trap, so if there’s a big migration of any species, it’s reflected in all three,” she explains.
Daniel Lingenhöhl and Sasha Warren
Reference: “Potential for identification of wild night-flying moths by remote infrared microscopy”, Meng Li et al. in Journal of the Royal Society Interface, vol. 19, June 2022. This article was published in the Science and Research Notes section of October 2022.